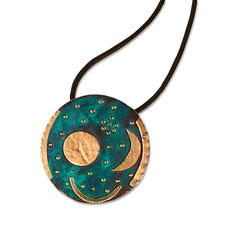 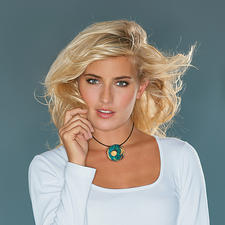 Nebra Disk - The world’s oldest illustration of the cosmos. Made like the 3,700 year old original.

The world’s oldest illustration of the cosmos. Made like the 3,700 year old original – in patinised bronze, gold-plated.

Since July 1999, Germanic history has had to be rewritten after 2 treasure hunters discovered a sky disc on the Mittelberg near Nebra in Germany. It is the oldest known depiction of the cosmos which is amazingly precise. Bewildering proof of the advanced civilisation of the allegedly primitive, ancient Germanic people.
A key find in the field of archaeoastronomy and included in the Unesco documentary heritage list “Memory of the World” in 2013.
This detailed piece of jewellery is 4.2cm (1.6") in diameter and 1mm thick (the original disk had a diameter of 32cm (12.5")). 30 gold-plated platelets represent the stars; the cluster of stars represents the Pleiades also known as the Seven Sisters. Researchers cannot agree about the large “luminaries”. The “sun” could also be interpreted as a full moon. And the “crescent moon” could be a partial eclipse or, according to the most recent findings, even a ship. Some experts interpret the “sun boat” at the edge as the Milky Way. However, undisputed is the fact that the golden arches at the edge, which astronomers refer to as horizon curves, mark the sunrise and sunset in the summer and winter.
Handmade true to the original.
The sky disk is intricately cast by hand in bronze, then processed and patinised with fire. The luminaries and boats are gold-plated to make them stand out brilliantly. The back is completely gold-plated.
Can be worn as a necklace or brooch.
Two hangers on the back enable it to be worn either with the sun boat facing down or the Milky Way facing upward.