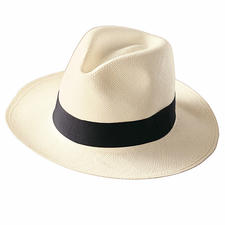 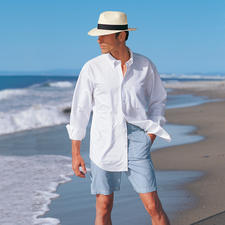 On 16 November 1906, President Theodore Roosevelt wore the typical soft straw hat with a black ribbon while visiting the Panama Canal. It was a hit in the world of elegance and the Panama hat immediately became the head covering for the very well-dressed. This original Panama hat comes from Ecuador, where only the best Panama hats in the world are still plaited by hand.
Protect yourself from the relentless sun with this classic, and don’t risk having to buy a coarse, hard straw hat when you get to your holiday destination! This genuine Panama hat is much softer and more elegant, and yet almost as reasonably priced.

The genuine Panama should actually be called an Ecuador.

Panama has always been the trade centre for fine straw hats. But since 1630 these hats have always been made exclusively in Ecuador. They are still traditionally hand plaited in small family run companies and made from premium natural toquila palm fibres (Carludovica Palmata) which are a type of reed. The leaves are cut into thin strips, dried and later held under water during the plaiting process which makes the fibres really pliable and smooth.